Literature education should not center only on the aesthetic appreciation of texts, but should also engage with global issues. An NIE researcher explains the importance of global citizenship and the potential of Literature to equip students with dispositions that would enable them to navigate today’s interconnected and interdependent world. 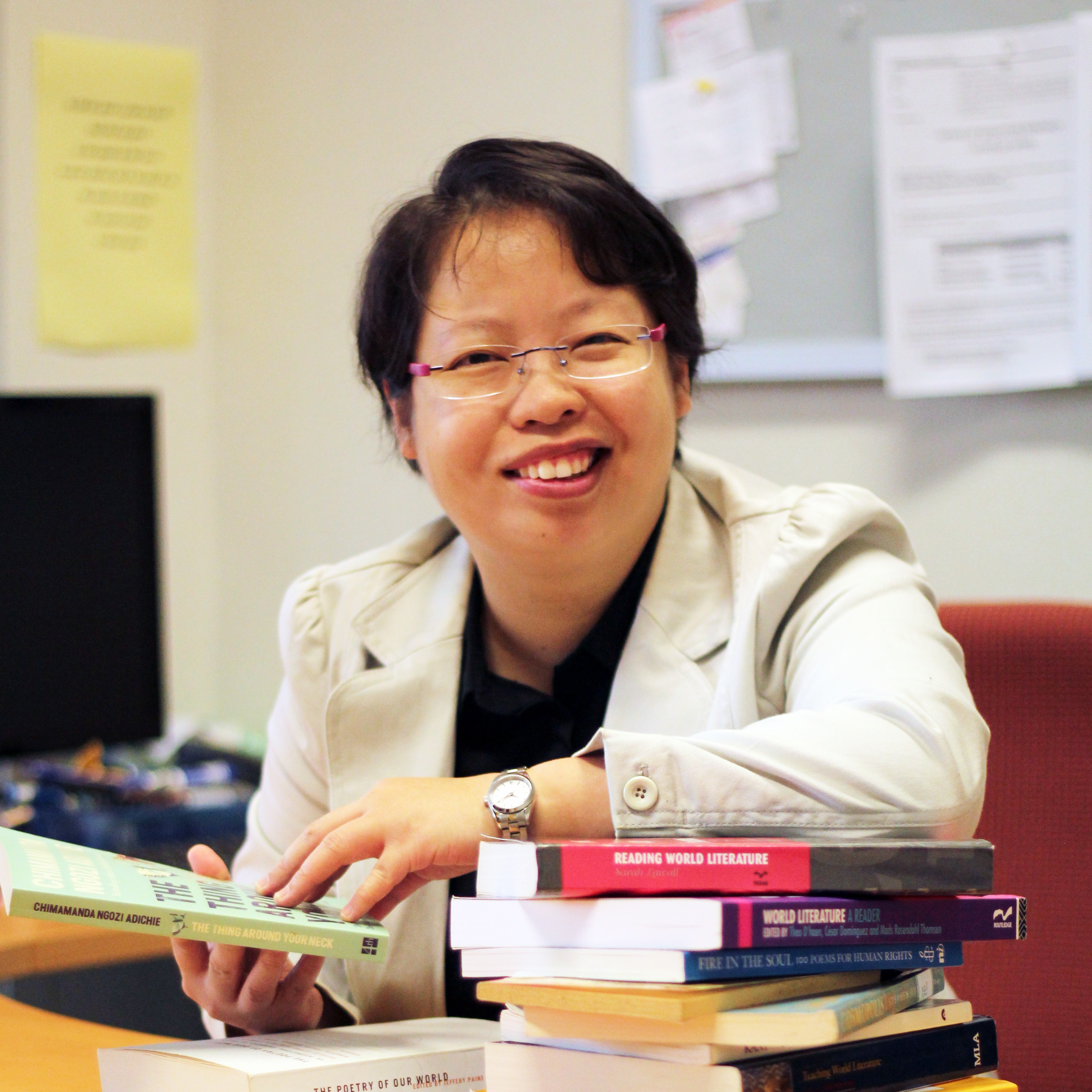 The study of Literature had traditionally centered on training students to critically read and analyse aesthetic features – plot, character, setting, theme and style – of a poem, short story, novel or play.

In recent times, however, there has also been a growing emphasis on making connections between a literary text and students’ lives. Additionally, the Literature in English syllabus now features more works from countries beyond the West such as the inclusion of Singapore literature.

What then is the significance of these shifts in Literature education and how do they benefit students today and in the future?

Contemporary views of cosmopolitanism, or citizen of the world, does not view such a person as rootless. Conversely, one may be rooted to home while being open to the world.

“In fact, global citizenship embodies the idea that individuals can navigate multiple spaces – home, community and world. Global citizens also do not lose their rootedness to ‘home’, but learn to negotiate the different spaces they are embedded in,” Suzanne clarifies.

Additionally, a global citizen is conscious about and committed to addressing issues facing the world. In a global age where people from across the world are increasingly interconnected, it has become more crucial for teachers today to think about and incorporate global education into their lessons to sensitize students to real-world issues.

“Many of the challenges we are experiencing today such as terrorism, human trafficking, climate change and infectious disease outbreaks are global in nature so we can no longer teach a subject in isolation from the real word,” Suzanne adds.

“In fact, global citizenship embodies the idea that individuals can navigate multiple spaces – home, community and world. Global citizens also do not lose their rootedness to ‘home’, but learn to negotiate the different spaces they are embedded in.”

– Suzanne, on the definition of global citizenship

For her research on Literature education and global citizenship, Suzanne focuses on cosmopolitan dispositions that a global citizen should embody – openness to difference, hospitality, criticality and a commitment to justice.

“Openness to difference and hospitality are other-centered dispositions that prioritize an understanding of the other over the self,” Suzanne explains. While the former concerns one’s ability to build connections with people from other cultures or with different beliefs, the latter centers on empathy, how welcoming one is to others and the capacity to listen and suspend judgement.

With technological advancements and the proliferation of social media, people today have more avenues to not only air their views, but also connect with individuals with similar worldviews.

“Although interacting with people on the same wavelength as us is always more comfortable, the reality is that students will encounter people who are different and whom they may disagree with when they graduate and enter the workforce,” shares Suzanne. Educators, as such, have to nurture students to have a more hospitable orientation to others and guide them to engage in dialogue with people from diverse backgrounds.

Aside from openness to difference and hospitality, criticality and a commitment to justice are also important in developing discernment and wisdom as well as in activating students to advocate for others who suffer implicit and explicit forms of violence in our world.

“With the influx of information available in our globalized age, one needs to be critical and be able to discern between the real and the fake,” Suzanne adds. “Moreover, a commitment to justice requires one to critically think about the kinds of systemic issues and values that reinforce the oppression and marginalization of others.”

“One crucial contribution of literary texts is that they immerse readers in the world of another who could be from a different culture or an individual who is experiencing the effects of global injustice.”

– Suzanne, on the importance of literary texts

While students can gain knowledge about global issues or people from diverse backgrounds through reading news articles or historical documents, these sources of information would help them understand such issues only at a cognitive level.

So what can be done to enrich students’ understanding of individuals from other cultures and the impact of global issues on people’s lives? According to Suzanne, one powerful platform is through the study of Literature.

“One crucial contribution of literary texts is that they immerse readers in the world of another who could be from a different culture or an individual who is experiencing the effects of global injustice,” explains Suzanne.

Citing the novel Sold, which centers on a girl trafficked from Nepal to India, Suzanne shares that some teachers who taught the book found that it broadened students’ understanding about the social and psychological effects of human trafficking. “Reading the text does not just bring the issue of trafficking to life, it also sensitizes readers to its processes and detrimental effects on families and societies,” she adds.

Additionally, Literature education equips students with the ability to critically read culture and values. “When reading texts such as To Kill a Mockingbird, students may engage in discussions about whether the laws and values of a particular society promote fairness and justice for all, including minority groups,” Suzanne elaborates.

Beyond nurturing cosmopolitan dispositions, Literature plays a role in disrupting media stereotypes of individuals living in countries plagued by civil strife or deemed “enemies of the West” and thus continually portrayed in a negative light.

“I often tell my students that if they are likely not to visit countries such as Afghanistan, Syria, North Korea, etc., then they should at least attempt to read stories about people living in the countries so that their perceptions are not based on media stereotypes,” shares Suzanne.

Role of Education in a STEM-Focused Age

In today’s technological age, many countries have made significant investments in STEM (Science, Technology, Engineering and Mathematics) given its importance to the global economy and role in improving material standards of living.

This trend, however, does not suggest that Literature or other humanities subjects are any less relevant in current times.

“Even if one plans to become a scientist or an expert in artificial intelligence, one must possess other-centered dispositions and ethical sensibilities, which can be cultivated through Literature, so that one’s knowledge and skills can be used to better humanity,” says Suzanne.

Furthermore, Literature is one of the few subjects that offers lessons in applied ethics. “Many literary texts illustrate how characters negotiate moral ambiguities and ethical dilemmas,” shares Suzanne. “In daily news, we also often read about situations involving moral dilemmas, such as whether or not a country should retaliate against another.”

By engaging in discussions about ethical issues in literary and real worlds during Literature lessons, students would not only develop a better understanding about complexities involved in navigating moral ambiguity, but also learn to reflect on their own value system.

“At the end of the day, Literature education should not be about the mere study of fictional texts, but about an exploration of the human condition, about what it means to be a human being and to defend the inherent dignity and worth of others,” concludes Suzanne.

Literature: A Non-Threatening Space for Discussion

Over the last two years, NIE Associate Professor Suzanne Choo has been working with a group of teachers and her research team comprising Dr Dennis Yeo and Mr Dominic Nah to design lessons on race and identity through Singapore literature.

“These lessons aim to get students thinking about otherness within Singapore, in particular who is the ‘other’, how a person is ‘othered’ and how people feel when they are ‘othered’,” shares Suzanne. Teachers would also engage students in discussions about stereotypes, or introduce them to texts that feature the perspectives of different racial groups in Singapore, including those beyond the CMIO (Chinese, Malay, Indian, Others) categories.

While Suzanne acknowledges that issues pertaining to race and identity can be sensitive and uncomfortable, she believes that educators should not shy away from engaging students in discussions about potentially controversial topics.

“In the Literature classroom, racism is often discussed from afar especially in the West. However, we should bring discussions about race closer to home to make students aware about stereotypes and help them realize that they themselves might have perpetuated stereotypes about others,” explains Suzanne. “In doing so, students would also recognize that they have a role to play in addressing racism in their own society.”

So what can Literature teachers do to facilitate discussions about race or any topic that may be sensitive or controversial during lessons? Suzanne believes that teachers must first establish a culture of empathy and hospitality in the classroom.

“In an ideal Literature classroom, the teacher opens up a space for students to respond personally and constructively to sensitive issues,” says Suzanne. “At the same time, teachers should help students recognize that their response must be coupled with respect and any comments made should stem from an understanding of the other.”

Ultimately, when open and honest conversations about sensitive topics can take place in the Literature classroom, students will also develop a richer and more rounded understanding of the world around them.

Suzanne Choo is Assistant Dean, Teacher Leadership at the Office of Teacher Education and Associate Professor with the English Language and Literature Academic Group at National Institute of Education, Singapore. Her book, Reading the world, the globe, and the cosmos: Approaches to teaching literature for the twenty-first century was awarded the 2014 Critics Choice Book Award by the American Educational Studies Association. Her research interests lie in cosmopolitanism, ethical criticism, and Literature Education.