How did you discover Positive Education? 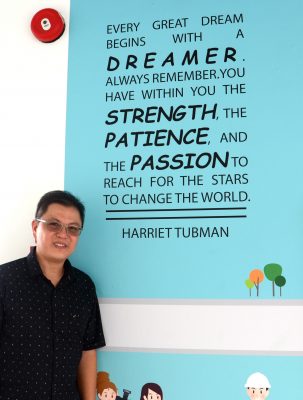 I first learned about Positive Education in 2012, a year before Westwood Primary School (WWPS) was established.

During that period, I sensed that education in Singapore was at a crossroads – that we have to decide if excellence (e.g., success in academics, co-curricular activities) or well-being (e.g., values inculcation, growth mindset, positive emotion) should be the key focus of education. This observation prompted me to think about whether we really have to prioritize excellence over well-being or vice versa in education.

I began exploring approaches to education that foster both excellence and well-being, and discovered Positive Education and the work of Geelong Grammar School through my research. Coincidentally, not long after I embarked on this discovery journey, I learned that I would be leading WWPS the following year.

What inspired you to anchor the school culture of Westwood Primary School in Positive Education?

I believe that excellence and well-being are equally important and we need not pursue one aspect at the expense of another. Furthermore, my experience as an educator has made me conscious
that amidst the pursuit of excellence, we also have to promote the well-being of students and staff to nurture a thriving school community.

When I was preparing to start work at WWPS, I often thought about how the school could bring forth an experience of education that would enable students and staff to flourish. I thus conducted further research on Geelong Grammar School and was struck by the efficacy of its Positive Education framework in fostering wellbeing and excellence in the school community – that not only affirmed my belief that we can pursue both in education, but also motivated me to initiate a similar framework in WWPS.

“I believe that excellence and well-being are equally important and we need not pursue one aspect at the expense of another.”

Why is Positive Education relevant today and how does it benefit students?

Until recently, there has not been much emphasis on the emotional aspect of learning within the context of education in Singapore. Today, there is greater discussion on the joy of learning, experimentation and intrinsic motivation – these boil down to whether the educational environment facilitates learning.

As an educational philosophy connected to positive psychology, Positive Education seeks to enable students to recognize that they have the power to derive their own happiness and fulfillment. This begins with having students focus on the positives and viewing the glass as half-full rather than half-empty.

In WWPS, for instance, we get our students to share what went well for them every week so that they are aware that there is always something to celebrate and be thankful for. We also aim to nurture resilience in our students by cultivating in them the mindset that they have the inner capacity to overcome challenges and can bounce back even after experiencing setbacks.

In addition, WWPS also involve parents by encouraging them to write affirmation notes to their children and place them on a board of positivity during the meet-the-parents session. Children feel heartened and supported after they read their parents’ messages to them.

When Positive Education is enacted well and students internalize its takeaways, they would become self-motivated and self-directed learners with a healthy outlook on life. These attributes
would also better position students to succeed in whatever they pursue.

What advice do you have for school leaders/educators who wish to encourage a school culture of Positive Education?

Over the years, as the staff community of WWPS expanded, we had to redouble efforts to induct new staff into the school culture. Our new teachers also had to enact Positive Education in the classroom and the initial lack of familiarity could mean that they do the form but not the substance of the approach. As Positive Education is not a process but about attitudes and beliefs, we have to review our practices regularly to ensure that students and even staff actually benefit from Positive Education.

Another challenge I have encountered concerns staff who are undecided about whether Positive Education is for them. Instead of convincing them to believe in this approach, I invite these staff to join my team on board a journey of discovering Positive Education in WWPS and the value it brings to them and their work.

“When Positive Education is enacted well and students internalize its takeaways, they would become self-motivated and self-directed learners with a healthy outlook on life.”

What challenges did you encounter in making Positive Education a reality in Westwood Primary School and how did you address them?

Know and experience what Positive Education can offer to yourself in your personal life before considering how it can be extended to your colleagues and students. Positive Education should also not be regarded as a to-do list or tool in itself, but as a school culture and educational philosophy to uphold.

Parental engagement is another area that school leaders should focus on. At WWPS, we run Positive Education workshops for parents to help them better understand the work we do. The topics covered in these workshops resonate with many parents and they recognize the value that Positive Education brings to their children. In fact, parents also wish to join us on board this journey and find out how they can complement our work at home.

Ultimately, the success of Positive Education is not only dependent on the efforts of teachers, but also parental support.

Ng Yeow Ling is Principal of Westwood Primary School. He began his career in education in 1995 and took up his first school leadership role in 2004. Yeow Ling headed another primary school before joining Westwood in 2013.